LOCKDOWN: A Tale of Interrupted Induction, a Quest for Calpol & Driving Demand for Dumpers.

When I joined Thwaites back on March 2nd, 2020, the world was a rather different place.I was excited and looking forward to my induction and training at the Leamington Spafactory. With my train tickets and a midweek hotel booked for the first fortnight, I was ready to dive in and embrace my new company, colleagues, and customers!

Ah! Expectations vs reality. After 2 weeks at the factory,observing the unique Thwaites fabricating, welding, spraying and assembly lines,the world came to an abrupt standstill and I,like many,spent the spring/summer months working from home. I have been assured that I am not to blame,and the pandemic would have happened anyway.

In mid-March, Covid-19 had gathered pace, itwas the only thing on the news and other countries werealready in lockdown. We have two children who at the timewere 4 years and 4 months old. In my 3rd week it was clear that this situation was escalating,Thwaites would have to react.

I was invited into our Deputy Chairman’s office…As one of the last recruits a degree of anxiety aroundthe personal outcome of such a serious worldwide crisiswas playing on my mind. Thoughts were racing around my head,I had several years’ servicewith my previous employer,should I have stayed…ah fear not.

It goes without saying (but I will anyway) that I feltextremely fortunateto have been told.“Relax, don’t worry, we recruited you for the very long term and your position is secure, in spite of what may be about to unfold.” It gave me an immediate insight into how Thwaites senior team treat their employees andinturn how this drives incredible loyalty from the workforce.

I did spare a thought for a Thwaitescolleague who joined some twoweeks after myself. Kudos to Helen in the Health and Safetyteam who actually started twodays before theglobal pandemic took grip, imagine that. She is still here tooandhas done a fantastic job enabling the factory to return in a safe, socially distanced way and for manufacturing to recommence.

On the first day I was asked if I was comfortable continuing with the plan as Thwaites were concerned with how I was feeling,given I have ababy at home. I was given the option to postpone. However, after speaking with my colleagues, family and Paul Rodwell in particular, I felt with the socially distanced plan in place we could continue.

So off we went,Paul and I had a bonding session ofsteak and chips and a few beers to get to know one another.

It’s fair to say the Hotel near Reading was very pleasant, but absolutely deserted, it was like the set from ‘The Shining’. Although a few business travellers emerged later in the evening it was more through curiosity, glued to the TV like us, for updates or reassurance. When you seek reassurance from sky news, you know it’s serious.

The next day was spent with Richard North from Lister Wilderthe Thwaites distributor for the South East, a lovely avuncular chap. We didvarioussite visitsbefore heading over to Worcester Hire Centre who own and operate a Thwaite fleet.

It was becoming clear throughout the day that businesses were sending employees home, whilst flights and events were being cancelled. Our latter afternoon appointments were mutually postponed as people refocused their priorities.

As we headed back to our hotel the news was reporting panic buyingsowe thought we would call at a supermarket to pick up someessentials. I wanted to pick up some Calpol for the kids as we were down to half a bottle. Paul on the other hand went on trend and decided to source toilet paper. I quickly foundthe Calpoland caught myself thinking…here I am 120 miles from home, asking a shop keeper somewhere north of Oxford if he has any toilet roll, on behalf of acolleagueIonlymet yesterday.

On a serious note, the image of supermarket aisles eerily devoid of groceries and essentials really did stay with me and I will never take it for granted ever again.

Everything changed. Thwaites, following the Government’s lockdown dictate,announcedthat the factorywas to cease production.The teamswere to be sent homewhilst consideration could be given to next steps…So much apprehension and nervousness.

On the first morning I sat at home, laptop open, revising my notes from the factory induction and trying to memorise spec sheets,all accompanied by a 4-year-old boy who wanted to wrestle and a baby girl who wanted to feed, sleep and cry or do all threeat the same time. I had only just got over learningwhat the word furlough meant (even though I wasn’t) when I remember hearing the word zoom for the first time. The last time I had heard this word it was being sung by Fat Larry’s Band on radio 2.

So,zoommeetings began,initially given my experience and not knowing the difference between a power shift and a power shuttle,I would really just listen inand try tokeep up with the conversation. I wasdetermined to contribute more over the coming weeks.My main concern to be honest was getting the kids out of the house at least 5 minutesbefore the Zoom meeting was due to start.

Everyone had a different lockdown experience, and my heart goes out to anyone who was impacted by the virus. In short, for us we were luckyand cannotcomplain. We discovered sourdough bread, ran out of quiz questions,and realised we walked 10,000 steps in a day.

The earlier quieter months in the Industry did give me the chance to learn the ropes, at my own pace. As matters developed and we all adapted,the dailyroutine became normalised and then slowly but surely dumperswere in demand.

Government guidelines had dictated that construction and plant hire could remain operational,supportingnot only the critical management of the Country’sutility and infrastructure, but to support the growing number of construction sites, particularly in England and Wales that were returning to work.

Coming out of Lockdown.

I am told,normally the construction industry is always the first to be hit in a recession and the last to recover. Whilst wewere always going tobe heading into a recession,these arenot normal times.With a Government determined to keep Britain building and a build, build, build strategy confidence levels were cautiously optimistic.

The factory as mentioned earlier reopened in April and manufacturing recommenced.

In May I was able to attend the sales office and factory,as we began filming promotional videos for the new Hi Vis cabbed dumper. I really enjoyedmy time in front of the camera despite30-degreeheat and wearingfull PPE. I promise I will becomemore naturaland perhaps slimmerin front of the camera.

Bylate June it was time to make my initial visitsto the Thwaites distributors who I manage.I firstly visited BTEPlant Salesin Preston, Leeds, and Leicester. Whilst a legacy of COVID-19 will be less miles travelled,it was good to make these trips to meet the distributors face to face, my further and subsequent meetings will of course bemore Zoom orientated.

In August I visited Lloyd Ltdin Carlisle,the Thwaites distributor for the North of England and the borders.

Ithen travelled up to Scotland to meet withour Scottish distributorMolson Young Plant Sales. I’ve recorded an account of these visits with a series of short videosthat are now available to watch across Thwaites social media channels. If you do get chance,please like and follow Thwaites where we post regularly to keep you updated.

As a footnote: I took delivery of my brand-newcar this week-a Hybrid Ford Kuga.I love itand I am glad to be back on the road, so full ‘renewable energy’ ahead…oh no, what now… there’s a safety recall on the battery due to risk of fire…Roll on 2021!Thanks for taking the time to read my blog. My contact details are below if I can every help you with a dumper enquiry or introduce you to your nearest Thwaitesdistributor. 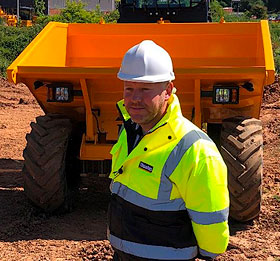