Over 50 years working with TBF Thompson

Operating out of Coleraine, Malluskand Newtonabbey Thwaitesand TBF have a strong strategic relationship that dates back some 50 years.

Initially, the respective organisations developed rapidly in post war Britain during the rebuilding of both the Nation’s infrastructure and housing stock.

Both businesses throughout theirformative years have had similar shared experiences. Byrecognising and delivering on customers’ needs, therespective organisations have developed values and ethics that are as important today as they were back in those early days.

Commenting Thwaites Managing Director Ian Brown said “Firstly onbehalf of Thwaites we send my best wishes and many congratulations to Seamus Doherty and the TBF Thompson team on reaching their 60thanniversary. Recently I noted that back in the 1970’s Thwaites had some 16 distributors, of the two that have endured and remain with us today,one is TBF Thompson”. 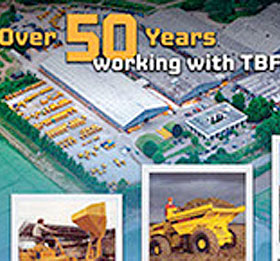